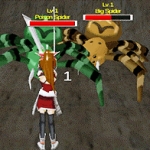 In Weapon Quest 3D, the player can choose a warrior and its class either archer or swordswoman. Then, there's an NPC where you can get quest, buy items, etc.As soon as the player is done with the quest, there will be rewards that he/she will receive such as exp, gold, and potions.This game also has a dungeon, but be careful because the mobs that are living in there are more advanced and have more skills than the mobs that are living in the greenfield. The player can also craft items like sword or bow, and armor. Weapon Quest 3D is a great game that you can play for free at in friv2019.com. Regardless Weapon Quest 3D game, we provide many cool Friv 2019 games to play for free.