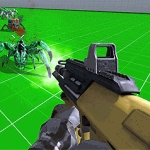 Are spiders scaring you? And what would you say to explode a few spiders? Awesome, isn't it? Take a gun and shoot them all! Welcome to Spiders Arena 2! You will have to survive as long as possible, wave after wave, against big spiders and other machines. You can buy ammo and new weapons in the arena shop. The more waves you pass, the harder the survival. Have fun! Enter to enjoy playing Spiders Arena 2 game without any charges at friv2019.com. Spiders Arena 2 is one for our amazing Friv 2019 games to play and having fun.